What on Earth is PVI?

PVI stands for Cook Partisan Voter Index and it measures how strongly Democratic or Republican a congressional district (or state) was in recent presidential elections. It basically tells you how a district has been voting in the past. Now, you are probably wondering as well what to make of a news article that says “With a PVI rating of R+1, Texas’ 23rd Congressional District is the most competitive district in the state”. How can we read this? Well, the PVI assigns an R or a D (for Republican or Democrat) plus a number that indicates how each congressional district voted, as compared to the national average in the previous two presidential elections.

In its core, the PVI can tell us, more or less, how future elections can look if a district follows the historic presidential voting trends.

Back to our Texan example, 23rd District in Texas is considered a competitive district because it has been only a little bit more Republican than the average (just one point more!) and this means that a Democrat candidate has a shot at winning in the next elections. Gina Ortiz Jones is the Democrat candidate and just by looking at the PVI of the district, we can tell that her odds are good.

In its core, the PVI can tell us, more or less, how future elections can look if a district follows the historic presidential voting trends. It also has nothing to do with previous local election results. Having said that, if we can determine which particular districts are following a certain trend and, if it continues that partisan trend, we can observe what is expected to be the advantage of one party over the other in the next election cycle.

How can you know if this makes sense?

Well, the next graph shows an example of the relationship between PVI and the results of the local elections for congressional House Representative in 2018. The blue line shows the PVI of each district, while the grey dots show the margin of victory (this is the difference of the percentage of votes obtained by the Democrat candidate and the percentage of votes obtained by the Republican candidate in each district). The closer a dot is to the PVI line, the more similar the local results were to the 2012 and 2016 presidential election results for that district. Even in cases where the dot was not completely aligned with the PVI line, dots in quadrant B and D in the graph show the districts where the vote turned out to be what we expected only by observing the PVI. Pretty much, most of the districts, right? In quadrant B we see Democrat districts that voted mostly for a Democrat in 2018. Quadrant D shows Republican districts that voted mostly for the Republican candidate in 2018. 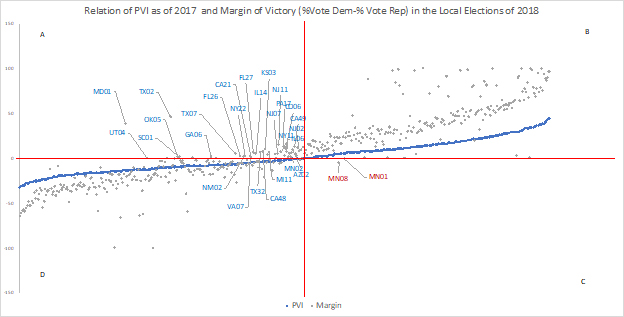 In the 2018 House congressional elections, all but three of the 40 districts which flipped from R to D had a PVI of R+9 or lower.

Two districts had a PVI R+10, one of which – SC01 - was an open seat as the incumbent (Stanford) lost in the primary. The other (OK05) had Kendra Horn unexpectedly win. One district -  UT04 - with PVI R+13 was flipped as the incumbent had a public dispute with the president.

You can see why the PVI is an important.  It is a powerful diagnostic tool of the voting trends of a state or a district and, at the same time, it allows us to predict which districts ‘flip’ based on how close they are  to the political center.